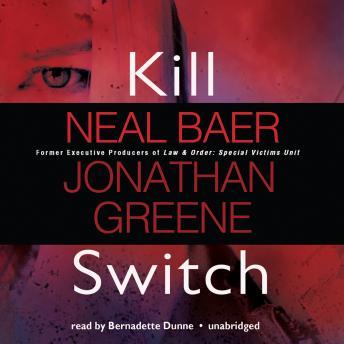 A heart-pounding glimpse into the world of forensic psychiatry, Kill Switch marks the powerful fiction debut of Neal Baer and Jonathan Greene—former executive producers of television’s acclaimed Law & Order: Special Victims Unit. Filled with breakneck suspense, vivid characters, and riveting detail, it is a mind-bending thriller you’ll never forget.
Meet Claire Waters, a young, dedicated forensic psychiatrist with unnervingly personal insights into the criminal mind. Haunted by a disturbing childhood incident—and driven by her demons—Claire has always been drawn to those rare “untreatable” patients who seem to have no conscience or fear. She has a natural ability to put people at ease, to help them face their darkest secrets. But one shocking case could make or break her career—and it’s waiting for her in the psychiatric wing of New York City’s Rikers Island.
His name is Quimby. A deranged inmate whose boyish good looks hide a sordid history of dysfunction and abuse, Quimby triggers something in Claire she’d rather not face. As she tries to unlock Quimby’s past, she unwittingly reveals her own painful secrets—leaving herself dangerously vulnerable. For Claire, the patient’s obsessions are just the beginning. When the case propels her into the mind of another killer—a homicidal maniac who’s watching her every move—it could only end in madness, or murder, or both.
Brilliantly constructed and breathtakingly suspenseful, Kill Switch is a masterful combination of murder, mystery, and modern forensics that will keep you turning the pages to the final shocking conclusion.