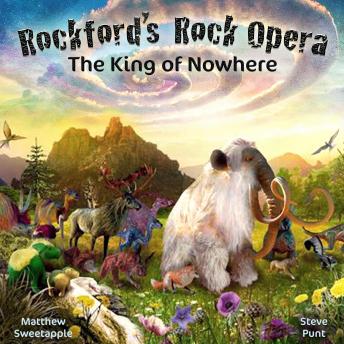 The King of Nowhere (Dramatised Musical Adventure): Into the Land of Extinction

Created by writer, Steve Punt and musician, Matthew Sweetapple, The King of Nowhere is the second dramatised, musical story from Rockford's Rock Opera – creators of Lost on Infinity.

Acclaim for The King of Nowhere'It was hard to see how the creators of Rockford's Rock Opera were going to match the sheer charm and originality of Lost on Infinity. Well, they have... and some! This is a fantastic, thought provoking and funny story with great songs.' Audiobook Review

'What I love most about it is the underlying theme of reclaiming goodness and joy from evil and sorrow. Knocks most of that gooey, superficial children's stuff into a cocked hat! What a story! It’s great to be back on Infinity. The whole family is singing along.' Clare Vincent

The StoryFar away in the Sea of Tranquillity is the Island of Infinity, home to the last one of every extinct animal species. This is where the sticky Cocklebur Ick must now find a home. But her search brings her into the domain of the mysterious King of Nowhere, the most feared creature on Infinity.


The King of Nowhere, the second adventure from Rockford's Rock Opera, is a tale about extinction and redemption. It’s a hopeful story that shows that even the smallest creatures can make the biggest difference and that although we may sometimes may feel lost, there is always hope.

For ALL AGES – children and adults.

King of Nowhere (Dramatised Musical Adventure): Into the Land of Extinction