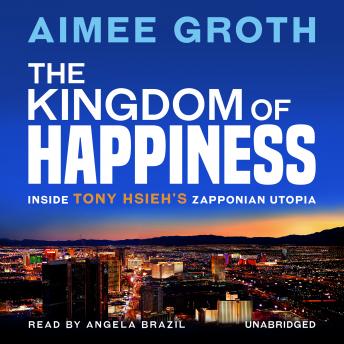 The Kingdom of Happiness :Inside Tony Hsieh's Zapponian Utopia

In 2010 Tony Hsieh was introduced to many as a visionary modern business leader. Under Hsieh's leadership, Zappos became the world's largest online shoe company by championing satisfied customers and a valued workforce. After his company was purchased by Amazon, Hsieh turned his energies and considerable fortune toward a much larger goal: building a new and more socially conscious Silicon Valley in the heart of downtown Las Vegas, all within his five-year plan.

Hsieh challenged business and technology journalist Aimee Groth to uproot her life and be a participant in his social engineering experiment. Beginning with couch surfing, moving to a Downtown Project crash pad, and then living in Zappos corporate housing above the Gold Spike bar, Groth had a front-row view of Hsieh's efforts to build his ideal society.

With interviews from insiders on all ends of the Zappos spectrum-like the "broken dolls" who gravitate toward Hsieh's almost cultlike personality and make up his inner circle, to the Zapponians who live and work on campus, to players in the top echelon of Silicon Valley-Groth offers a unique view of a world few people know much about, and sheds a new light on this complex, eccentric man. The Kingdom of Happiness is the story of one man's quest to create his own nirvana in the desert based on his exacting design with lessons he's gleaned from rave culture and Burning Man. Is it the business model of the future or a cautionary tale of hubris?