A Kiss Before Dying 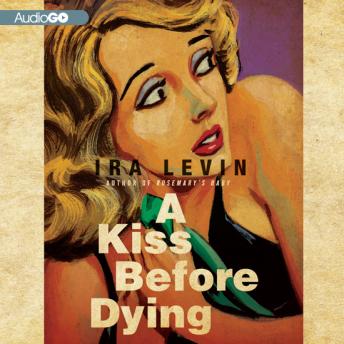 A Kiss Before Dying not only debuted the talent of best-selling novelist Ira Levin to rave reviews, it also set a new standard in the art of mystery and suspense. Now a modern classic, as gripping in its tautly plotted action as it is penetrating in its exploration of a criminal mind, it tells the shocking tale of a young man who will stop at nothing-not even murder-to get where he wants to go. For he has dreams; plans. He also has charm, good looks, sex appeal, intelligence. And he has a problem. Her name is Dorothy; she loves him, and she's pregnant. The solution may demand desperate measures. But, then, he looks like the kind of guy who could get away with murder. Compellingly, step by determined step, the novel follows this young man in his execution of one plan he had neither dreamed nor foreseen. Nor does he foresee how inexorably he will be enmeshed in the consequences of his own extreme deed.