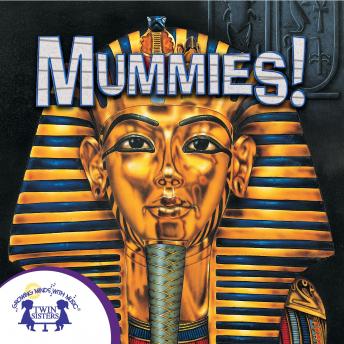 As part of the unique, science Know-It-Alls! Series that features interesting science facts, this audiobook puts the spotlight on Mummies! Did you know the mummy of the Pharaoh Khufu was placed in what is called the Great Pyramid? It is the largest stone structure in the world, consisting of 2,300,000 stone blocks, each weighing several tons! That's one big tombstone! Awesome narration and sound effects plus many interesting facts, makse this audiobook fun and exciting for young science enthusiasts age 4 and up! Titles in the Know-It-Alls! Series include: Butterflies, Crocodiles, Dinosaurs, Farm Animals, Safari Babies, Snakes, Sharks, Spiders, Whales, Wolves, Puppies, Wild Cats, Bugs, Birds of Prey, Fish, Frogs, Apes, Seals, Bats, Bears, Predators, Mummies, Volcanoes, Lizards, Kittens and Horses.Volcanoes, Lizards, Kittens and Horses.