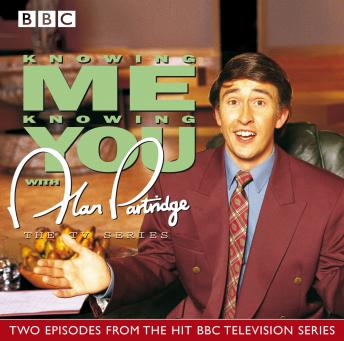 Knowing Me, Knowing You With Alan Partridge TV Series

'Knowing me Alan Partridge, knowing you... a-ha!' A lot of people say that, when it comes to drama and comedy, the pictures are so much better on the radio. As Alan Partridge says, 'all those people are wrong'. There's a new chat in town as the hit programme comes live from BBC Television Centre, and Alan ushers on a variety of guests including horsewoman of few words Sue Lewis, powerful hypnotist Tony le Mesmer, fashion designer Yvonne Boyd, and husband and wife thespians Tania Baker and Gary Baker. There's also a whole edition of the programme broadcast from sexy Paris, city of French people. Joining Steve Coogan as he squirms his way across the easy chairs are Steve Brown, Minnie Driver, Rebecca Front, Melanie Hudson, Doon MacKichan, Patrick Marber and David Schneider.

Knowing Me, Knowing You With Alan Partridge TV Series