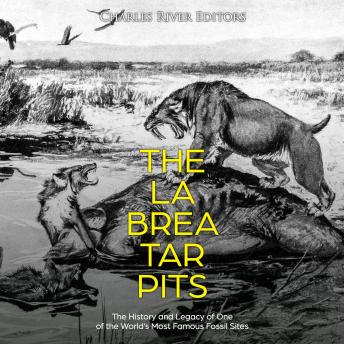 The La Brea Tar Pits: The History and Legacy of One of the World's Most Famous Fossil Sites

Even at a distance, the acrid stench of asphalt and sulfur singes the hairs of people's nostrils, and when the blustering winds subside, the potent miasma lingers in the air. To the untrained eye, the La Brea Tar Pits seem to be nothing more than simply pools of thick, viscous black sludge, its obsidian-like surface bestrewn with an assortment of autumn leaves and dirt. Gooey methane bubbles spurt up periodically, shattering the glassy veneer of the grease-black lakes, and the shiny bubbles swell to varying sizes and wiggle from side to side before popping, the sticky collapse almost reminiscent of cracking open a chocolate molten lava cake.

Technically, these lustrous lakes of ink-black, while branded "tar," are in actuality pools of asphalt seeps that have remained in place for several millennia, gushing forth from a natural subterranean petroleum spring underneath the city of Los Angeles known as the "Salt Lake Oil Field." Needless to say, the tar pits are a far cry from the glittering, crystalline ponds cooled by the shade of surrounding palm trees found throughout the City of Angels. Indeed, the pungent reek of asphalt, pulsing methane bubbles, and their hauntingly black surfaces, making it impossible to gauge the true depth of the asphalt abysses, should have seemingly served as clear deterrents to the animals that roamed the vicinity prior to their entrapment. Instead, judging by the treasure trove of bones and remnants that have been uncovered within the pits, the sludge seemed to have figuratively emitted a siren song that no animal, regardless of stature or physical power, could resist.

Evidence shows that the slow, torturous deaths of many of the creatures who became permanently ensnared in the asphalt quicksand were worsened by passing predators who essentially stumbled upon supper served on a sticky platter. Unfortunate, or rather, clumsy predators sometimes slipped, struggled, and were ultimately swallowed up themselves.

La Brea Tar Pits: The History and Legacy of One of the World's Most Famous Fossil Sites