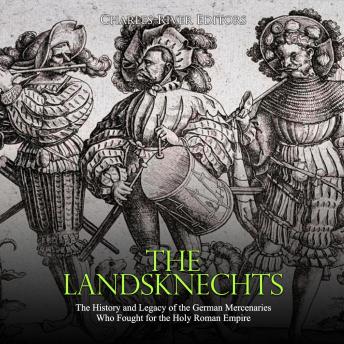 Landsknechts, The: The History and Legacy of the German Mercenaries Who Fought for the Holy Roman Empire

Artillery and handgonnes had been known since the early 14th century but only became effective near the end of the 15th century, when they were the final factor in the infantry revolution and began to change warfare forever. By the middle of the 15th century, artillery was knocking down castle walls that had stood for generations. Infantry also proved their worth with powerful longbows and tight formations of polearms upsetting the long dominance of mounted, heavily armored knights, and handheld firearms threatened to make armor obsolete. New types of warriors were developed, and new tactics had to take the emerging era of black powder weapons into account, ushering in a time of great change in military strategy, tactics, and technology.

The Middle Ages witnessed almost constant warfare in Europe, so mercenaries were a constant on the battlefield, but the 15th century also saw the rise of mercenary usage by the increasingly wealthy aristocracy. One of the finest groups of mercenaries were the Landsknechts from central and northern Europe. The term means “servant of the country,” and they mostly served the Holy Roman Empire, first under Emperor Maximilian I (r. 1508-1519) and then under his successors. The Landsknechts (German: Landsknechte) were masters of the battlefield, adept at pike, sword, and dead shots with the crude matchlocks of the day. The only mercenaries rivaling them were the famous Swiss, who they hated and often fought bitterly. The Landsknechts were as famous for their flamboyant costumes as much as their prowess on the battlefield, and they became symbols of rebellion and freedom in early modern Europe, even as they fought in service of Europe’s largest empire.

Landsknechts, The: The History and Legacy of the German Mercenaries Who Fought for the Holy Roman Empire