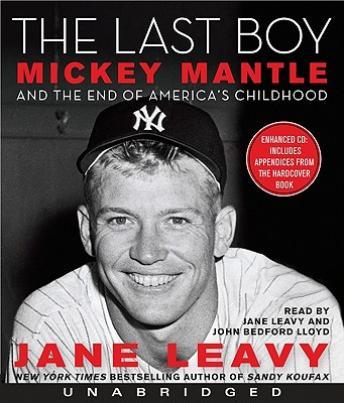 The Last Boy: Mickey Mantle and the End of America's Childhood

Jane Leavy, the acclaimed author of the New York Times bestseller Sandy Koufax: A Lefty's Legacy, returns with a biography of an American original'number 7, Mickey Mantle. Drawing on more than five hundred interviews with friends and family, teammates, and opponents, she delivers the definitive account of Mantle's life, mining the mythology of The Mick for the true story of a luminous and illustrious talent with an achingly damaged soul. Meticulously reported and elegantly written, The Last Boy is a baseball tapestry that weaves together episodes from the author's weekend with The Mick in Atlantic City, where she interviewed her hero in 1983, after he was banned from baseball, with reminiscences from friends and family of the boy from Commerce, Oklahoma, who would lead the Yankees to seven world championships, be voted the American League's Most Valuable Player three times, win the Triple Crown in 1956, and duel teammate Roger Maris for Babe Ruth's home run crown in the summer of 1961'the same boy who would never grow up. As she did so memorably in her biography of Sandy Koufax, Jane Leavy transcends the hyperbole of hero worship to reveal the man behind the coast-to-coast smile, who grappled with a wrenching childhood, crippling injuries, and a genetic predisposition to alcoholism. In The Last Boy she chronicles her search to find out more about the person he was and, given what she discovers, to explain his mystifying hold on a generation of baseball fans, who were seduced by that lopsided, gap-toothed grin. It is an uncommon biography, with literary overtones: not only a portrait of an icon, but an investigation of memory itself. How long was the Tape Measure Home Run? Did Mantle swing the same way right-handed and left-handed? What really happened to his knee in the 1951 World Series? What happened to the red-haired, freckle-faced boy known back home as Mickey Charles? "I believe in memory, not memorabilia," Leavy writes in her preface. But in The Last Boy, she discovers that what we remember of our heroes'and even what they remember of themselves'is only where the story begins.

Last Boy: Mickey Mantle and the End of America's Childhood