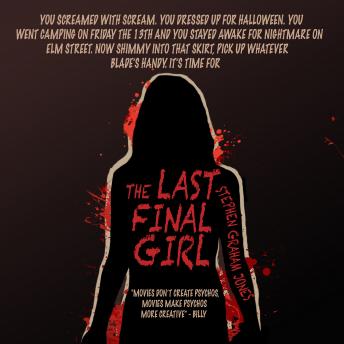 The Last Final Girl is like Quentin Tarantino's take on The Cabin in the Woods. Bloody, absurd, and smart. Plus, there's a killer in a Michael Jackson mask.' (Carlton Mellick III, author of Apeshit)
Life in a slasher film is easy. You just have to know when to die.
Aerial View: A suburban town in Texas. Everyone's got an automatic garage door opener. All the kids jump off a perilous cliff into a shallow river as a rite of passage. The sheriff is a local celebrity. You know this town. You're from this town.
Zoom In: Homecoming princess, Lindsay. She's just barely escaped death at the hands of a brutal, sadistic murderer in a Michael Jackson mask. Up on the cliff, she was rescued by a horse and bravely defeated the killer, alone, bra-less. Her story is already a legend. She's this town's heroic final girl, their virgin angel.
Monster Vision: Halloween masks floating down that same river the kids jump into. But just as one slaughter is not enough for Billie Jean, our masked killer, one victory is not enough for Lindsay. Her high school is full of final girls, and she's not the only one who knows the rules of the game.
When Lindsay chooses a host of virgins, misfits, and former final girls to replace the slaughtered members of her original homecoming court, it's not just a fight for survival - it's a fight to become The Last Final Girl.