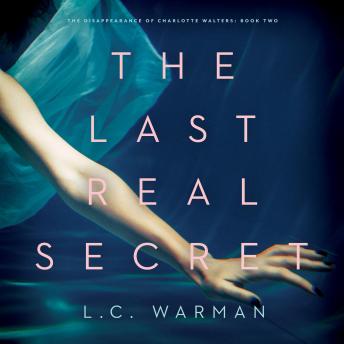 A missing girl with dark secrets. A friend who cannot let her go. A ticking clock that might just be running out.

Almost one week ago, 17-year-old Reese watched her best friend, Charlotte Walters, run laughing out of a party and into the woods by the lake.

Since then, Reese has followed up on every lead, talked to every suspect at the party, and found out secrets about Charlotte and St. Clair that she never would have believed. And yet, Charlotte is still missing.

Even a heart-wrenching confession from one of the partygoers has only solved one mystery, and opened up many others. Reese begins to ask herself: how well did she actually know Charlotte? Can she trust any of the people around her, including Charlotte's enigmatic older brother? And will she ever find Charlotte at all?

Soon, Reese realizes that she'll have to stake everything on one final effort, because time for Charlotte is running out. Now, Reese will finally get the answers she's been seeking-if she's brave enough to face them. But one last secret from Charlotte's family may just change everything.

THE LAST REAL SECRET is the third and final novel in the YA mystery trilogy "The Disappearance of Charlotte Walters."