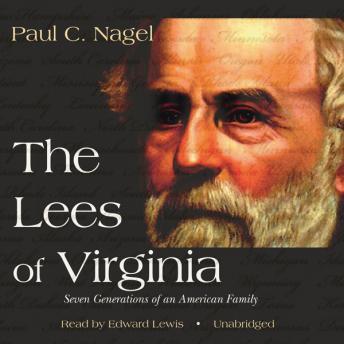 The Lees of Virginia

The descendants of Richard and Anne Lee, among the first families of Virginia, have occupied a preeminent place in American history. Two were signers of the Declaration of Independence, several others distinguished themselves during the Revolutionary War, and one, Robert E. Lee, remains the most widely known as a Civil War legend.
In The Lees of Virginia, Paul Nagel chronicles seven generations of Lees, covering over two hundred years of American history. We meet the dreamers and the nonconformists, the controversial and tempestuous personalities, the disgracers of the family name—and, of course, the family’s redeeming figure: Robert E. Lee, a brilliant military tactician whose ruling motto was self-denial and who saw God’s hand in all things. In these and numerous other portraits, Nagel discloses how, from 1640 to 1870, a family spirit united the Lees, making them a force in Virginian and American affairs.