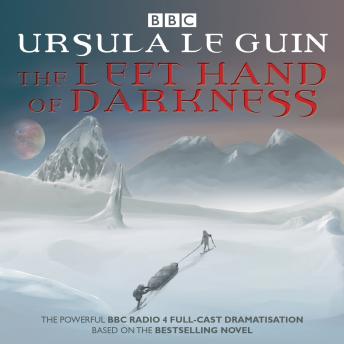 On an alien world in the middle of an Ice Age, one man prepares for the biggest mission of his life. Alone and unarmed, Genly Ai has been sent from Earth to persuade the people of Gethen to join the Ekumen, a union of planets. But it's a task fraught with danger.

Genly is shocking to the natives, for Gethen is a world in which humans are ambigendered – everyone can be a mother, and everyone can be a father. First Minister Estraven is the only person who champions Genly's cause, but their relationship is deeply incomprehensible and troubling.

As the duo embark on a journey that will take them to the edge of their physical and emotional endurance, the stakes are high – to save a world from war, and save their own lives.

Ursula Le Guin's award-winning masterpiece was one of the first feminist SF novels, and this compelling dramatisation is both a subtle exploration of gender and a thrilling tale of love, betrayal and survival in a landscape of endless snow and ice. It stars Lesley Sharp (Scott & Bailey), Toby Jones (Dad's Army) and Louise Brealey (Sherlock).. Duration: 2 hours approx.