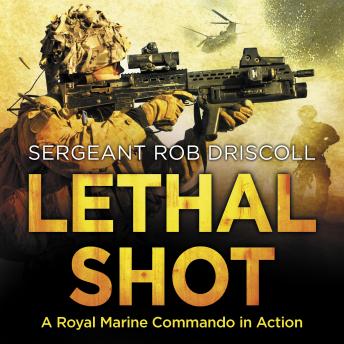 Rob Driscoll, former sergeant with 42 Commando, Royal Marines, served tours in Iraq, Kuwait and Kosovo. A born leader of fighting men, he also endured three tours in Afghanistan. The third of those will go down in history as one of the UK military's darkest hours, for it marked the first time a British serviceman has been tried for a murder on the battlefield since the Second World War.

That man was 'Marine A', Sergeant Alexander Blackman, Rob Driscoll's friend and fellow NCO in 42 Commando, and on the day in question they were commanding patrols within a few hundred yards of each other. Few men know what really went on that day in Helmand Province. Rob Driscoll is one, and, like Blackman, knew only too well the privations and frustrations of fighting an ubiquitous and tenacious enemy without sufficient resources and support.

Yet Lethal Shot is more than a compelling insight into one of the most controversial and divisive cases in recent military history. It is a clear-eyed account of life on active service with the Royal Marines, of incursions into war-torn countries where chaos and anarchy ruled - and of men risking their lives daily only too often to find that they would not be backed up by politicians at home. In charting its author's career as a Royal Marine Commando, it unflinchingly demonstrates the real-life horrors of engaging at close quarters with enemies such as the Taliban.

Rob Driscoll received a Mention in Despatches for his last tour of 'Afghan', the citation reading: 'He never bows to fatigue or danger and there is no doubt that his remarkable acts of selflessness saved a number of lives for which he deserves significant formal recognition.'