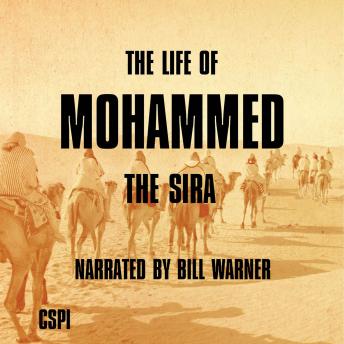 The Life of Mohammed: The Sira

THE LIFE OF MOHAMMED: THE SIRA is a condensed version of the biography of Mohammed, a man who became the first ruler of a united Arabia and laid the foundation for the empire of Islam. The Sira is not just a biography but it is also a sacred Islamic text of how devout Muslims should conduct their life.Mohammed's life is an epic story. He was an orphan who rose from poverty to become the first ruler of all of Arabia. He created a new religion, new methods of war and a new political system, including a legal code, the Sharia.Mohammed was the world's greatest warrior. Today no one wages war in the name of Caesar, Alexander the Great, Napoleon or any other military leader. However, every year many people die because of Mohammed. After 1400 years, Islam is still a powerful force in our world. Mohammed said that one day all of the world would live under his rule of law, the Sharia.To understand Islam, you must know the life of Mohammed. The Koran commands that every Muslim is to live a life identical to his. The religion of Islam is about worshiping Allah exactly as Mohammed did.

THE LIFE OF MOHAMMED: THE SIRA is a unique book that provides a concise taste of Islam and is completely authoritative. The reference system allows you to verify all information in the source texts.

Life of Mohammed: The Sira

This title is due for release on April 8, 2018
We'll send you an email as soon as it is available!