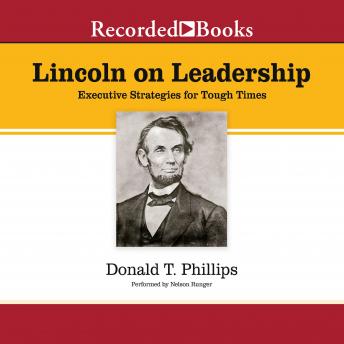 In this remarkable book-hailed by CEOs, politicians, coaches, and college presidents alike-Donald T. Phillips examines Lincoln's effective leadership style. As he explores the President's diverse management skills, he demonstrates how you can succeed with them in today's complex world. When Lincoln took the oath of office in 1861, the Confederate States had already seceded from the Union. Even though his own advisers expected him to fail, he eventually reunited the embattled states with uncommon good sense. Using historical anecdotes, speeches, and Lincoln's own letters, the author shares the President's practical managerial strategies: seize the initiative, wage only one war at a time, encourage risk-taking while promoting job security, circulate among the troops, and more. With this compelling portrait, Donald T. Phillips reveals Lincoln as one of the world's most outstanding leaders. Nelson Runger's thought-provoking narration will motivate you to influence others in the same quiet way.

This title is due for release on July 15, 2004
We'll send you an email as soon as it is available!