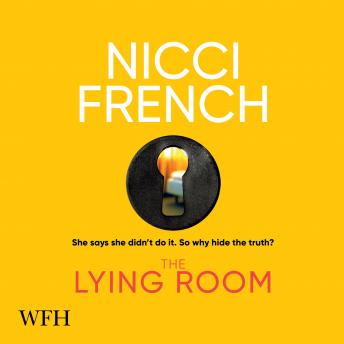 Neve Connolly looks down at a murdered man. She doesn't call the police. 'You know, it's funny,' Detective Inspector Hitching said. 'Whoever I see, they keep saying, talk to Neve Connolly, she'll know. She's the one people talk to, she's the one people confide in.' A trusted colleague and friend. A mother. A wife. Neve Connolly is all these things. She has also made mistakes; some small, some unconsciously done, some large, some deliberate. She is only human, after all. But now one mistake is spiralling out of control and Neve is bringing those around her into immense danger. She can't tell the truth. So how far is she prepared to go to protect those she loves. And who does she really know? And who can she trust? A liar. A cheat. A threat. Neve Connolly is all these things. Could she be a murderer?

"'The hook of The Lying Room is chilling: a woman discovers the dead body of a man she knows and doesn't tell a soul..Nicci French remains one step ahead of us as we race to unpick Neve Connolly's deadly tangle. Expertly paced, psychologically sharp, thoroughly enjoyable. " LOUISE CANDLISH

Nicci French have sold over 15 million books across the world in 32 languages. The Lying Room is their 21st book.