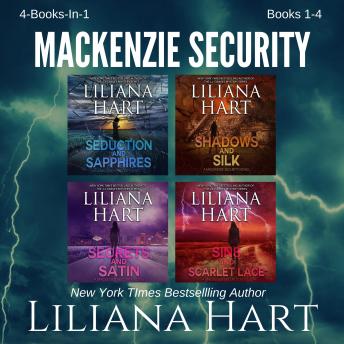 SEDUCTION AND SAPPHIRES
Cade MacKenzie is prepared to give his life to destroy the cartel that killed his lover, but the only way to draw them out is to present them with the perfect bait. Bayleigh Scott has no idea who her new neighbor is, only that her body is drawn to him in ways she can't explain, and the danger that surrounds him isn't the deterrent she knows it should be.
SHADOWS AND SILK
Darcy MacKenzie is hell on wheels. And when she has the chance to work with the elite team assigned to destroy the most dangerous drug cartel in the world, she jumps at the chance to lend her expertise by deciphering the Mayan hieroglyphs the cartel is using to send messages. The only problem is her partner is none other that Brant Scott-the only man she's ever loved and the one who left her without a backward glance.
SECRETS AND SATIN
No one knows heartbreak like Jade Jax. After losing her husband to a tragic death, she doesn't believe love can happen twice. But after years of living a half-life without her husband, her body starts to waken again, and needs she'd forgotten come to the surface. Max Devlin never thought Jade would want him outside of his dreams, but fate plays a helping hand when they're thrust into a high stakes mission, protecting each other's backs like old times.
SINS AND SCARLET LACE
Declan MacKenzie has loved the same woman for as long as he can remember, but after a mission early on in his career turns deadly, he realizes he can never have a wife or family and keep them safe. So he watches her marry another man. Sophia Huxley is involved in a nightmare. Her late husband has been labeled a traitor and he's made her the fall guy. There's no one she can call to prove her innocence. Except the man who broke her heart.

This title is due for release on September 28, 2019
We'll send you an email as soon as it is available!