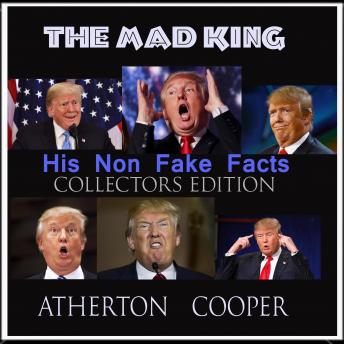 The Mad King - his non-fake facts. There are many. However the majority of his subjects are unaware of just how numerous they are.
What is general knowledge of the actions of the Mad King is just the tip of the iceberg. Or, to put it in a more appropriate phrase, just the dregs from the surface of the swamp.
We know, and have daily proof that his highness is a serial liar. We know he has trouble pronouncing and spelling a variety of normal words.

We know he's been accused by more than twenty women of being a sexual predator.
We know although he portrays himself as the ultimate businessman, the King has failed at more than twenty. Despite an inherited fortune. And an equally inherited credit line.
We know his critics say the Mad King is a narcissistic,racist,homophobic, meglomanic who promotes violence, hate and white Nationalism,while pillaging the royal treasury like a third World dictator to line his own pockets.
A prominent Harvard psychiatrist's evaluation: 'He's not even qualified to run a lemonade stand.'
What is not generally know is the extent of his illegal, immoral and unethical International business deals and connections.
Where this Mad King is concerned, the phrase, 'a massive web of corruption' is a gross understatement.
Attempting to unravel this web and it's connections, to the extent that's possible, as occupied Investigative Journalist Atherton Cooper through several books and as many years.
Now, in this special collector's edition - he puts all the pieces to together. Giving us a thoughtful, nuanced, and above all, factual portrait of the Mad King , through his non-fact facts.