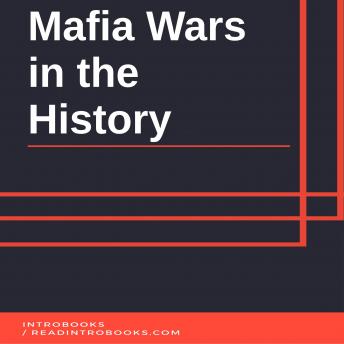 Mafia Wars in the History

The term "mafia" has been used to refer to various secret groups or organizations that are involved in various forms of organized crimes and are spread across the world in various countries. They are usually recognized by the name of the country in which they have originated. Most of the group members of the mafia belong to a particular nationality and operate in the particular country itself. The main goal of such mafia groups is to have full control over the various kinds of activities. They can even have a monopoly over certain criminal activities. But one should not be mistaken! Though several films, documentaries and plays have been enacted in the life of the mafias and the wrong deeds done by them, people might still get the impression that the mafias are good people. The people might be allured by the money-earning capacity of the mafias in no matter of time. The lavish lifestyle led by them and the kind of richness they possess, it might appear quite overwhelming on the exterior front. But the truth is that, on the inner side, it is all black. The mafias have their hands spoiled with the color of blood. Mafia members are constantly living under the violence from the other mafia groups and often end up getting killed or killing others. There is no room for peace in their lives. The world in the due course of the mafias and their menace, has witnessed several major wars. The Mafia Wars as it is called have been the root cause due to the disturbances created in one group or the other and in taking revenge on the other. As we live in the present era, there are still major mafia groups out there in several parts of the world.

Mafia Wars in the History