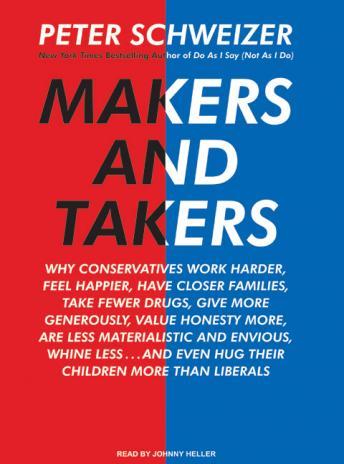 In Do as I Say (Not as I Do), Peter Schweizer exposed the hypocrisy of liberal elites in Washington and Hollywood. In Makers and Takers, he broadens his scope to examine the damaging effects of liberal philosophy on ordinary Americans. Drawing on national polls and academic studies, as well as the revealing testimony of liberals themselves, Schweizer shows that liberals are, on the whole, less honest, less generous, lazier, and more materialistic than their conservative counterparts. Moreover, conservatives are better parents, spouses, and citizens.

Schweizer's portrait is not a mischievous exercise in 'gotcha' journalism. Instead, tracing political and social changes over the past fifty years, he argues that the emergence of liberalism as a philosophy of selfishness is a direct result of big government. The enormous expansion of government has fostered the assumption among many Americans that the state is responsible for our financial, social, and moral well-being. From the myth that wealth is the result of luck and exploitation to the insistence that individuaals are not accountable to God or social institutions, the principles of liberalism have corrupted the personal virtues and community values Americans once honored.