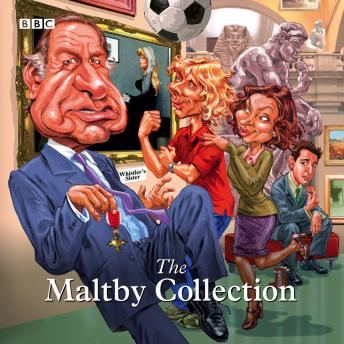 From the creator of 'Reginald Perrin', this is the complete series of David Nobbs’ BBC Radio 4 sitcom based in a London museum.Rod Millet has always dreamed of working at the Maltby Collection. He used to visit as a teenager, when he lusted after Whistler’s sister - and his mother, Rod wasn’t picky back then. On becoming the Museum’s Deputy Curator of Painting and Sculpture, however, it quickly becomes apparent that the chavvy son of a self-made biscuit mogul isn’t going to fit neatly into the musty, insular world of London antiquities. In these six episodes, Rod tries to save the museum from closure - even though by doing so he is threatening director Walter’s early retirement - and endeavours to find romance with the lovely Prunella. Can Millet save the day and win his boss’s hand? Listen and find out... Starring Julian Rhind-Tutt (‘Green Wing’) as Rod and Geoffrey Palmer as Walter, this well-written, gentle comedy features guest appearances from Hugh Dennis and Barry Cryer.