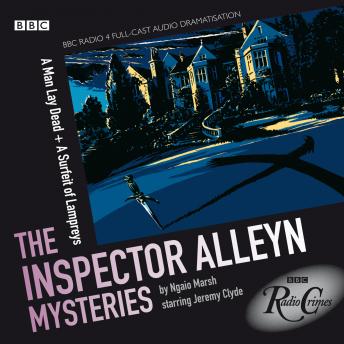 A Man Lay Dead & A Surfeit Of Lampreys: The Inspector Alleyn Mysteries

Two detective stories featuring gentleman detective Roderick Alleyn, adapted for BBC Radio. In A Man Lay Dead, a game of murders at Sir Hubert Handesley’s country house party becomes far too realistic for anyone’s liking. First a guest arrives with a dangerously lethal dagger and then, when the gong sounds to announce the start of the game, the victim plays dead in a very convincing manner. Chief Detective Inspector Alleyn believes the unusual dagger is a vital clue to the real-life murder, and soon he’s on the trail of a Russian secret society. In A Surfeit of Lampreys, the aristocratic Lampreys are charming but penniless – so a visit from the wealthy head of their family is greatly anticipated. However, their Uncle Gabriel isn’t persuaded to part with his money and a row ensues. When a body is found in the lift leading to the Lampreys’ flat, Chief Detective Inspector Alleyn finds a family immersed in hidden secrets and intrigue.