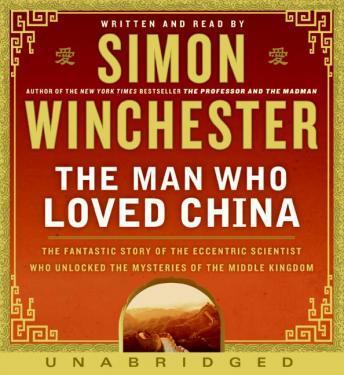 The Man Who Loved China

In sumptuous and illuminating detail Simon Winchester chronicles the extraordinary story of Joseph Needham, the brilliant Cambridge scientist who turned his eccentric genius on the study of China.

In 1937 Joseph Needham fell in love with a visiting Chinese student. He soon became fascinated by China, and his mistress persuaded him to travel to her home country. Thus began his undying passion for the world's most populous nation.

Needham tackled one of the great, unanswered historical questions: Why did a nation that had invented so much and had enjoyed 5,000 years of flourishing civilization, fail to undergo an industrial revolution, and instead spend so many modern years mired in poverty and racked by instability and revolution? By the time he died, Needham had produced seventeen immense volumes on China, marking him as the greatest one-man encyclopaedist ever.

Both epic and intimate, The Man Who Loved China tells the sweeping history of China through Needham's remarkable life. Here is an unforgettable tale by one of the world's inimitable storytellers.