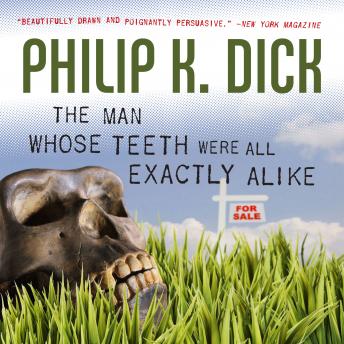 The Man Whose Teeth Were All Exactly Alike

"In 1981, Dick reread his eleven unpublished novels and selected this novel as his favorite of the lot....It tells the story of an out-of-place Jewish realtor and is told with a certain simple appeal." -Locus

The Man Whose Teeth Were All Exactly Alike was written in the winter and spring of 1960, in Point Reyes Station, California, immediately after Confessions of a Crap Artist. The next book Dick wrote was The Man in the High Castle, the Hugo Award-winning science fiction novel that ushered in the next stage of Philip K. Dick's career.

This novel, Dick said, is about Leo Runcible, "a brilliant, civic-minded, liberal Jew living in a rural WASP town in Marin County, California." Runcible, a real estate agent involved in a local battle with a neighbor, finds what look like Neanderthal bones in Marin and dreams of rising real estate prices because of the publicity. But it turns out that the remains are more recent, the result of an environmental problem polluting the local water supply.

"Whether writing brilliantly idiosyncratic science fiction or uniquely Dickian contemporary novels, Philip K. Dick was a major American literary talent who deserves an even wider audience than the formidable one he reached in his lifetime. This novel may be (as Dick himself believed) the best of all his unpublished mainstream works." -Michael Bishop

Man Whose Teeth Were All Exactly Alike