The Map of All Things 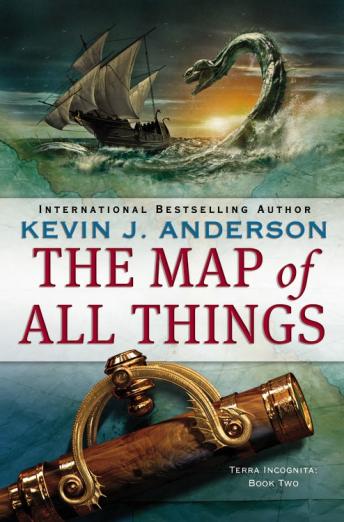 After terrible atrocities by both sides, the religious war between Tierra and Uraba has spread and intensified, irreparably dividing the known world. What started as a series of skirmishes has erupted into a full-blown crusade.

Now that the Uraban leader, Soldan-Shah Omra, has captured the ruined city of Ishalem, his construction teams discover a priceless ancient map in an underground vault -- a map that can guide brave explorers to the mysterious Key to Creation. Omra dispatches his adoptive son Saan to sail east across the uncharted Middlesea on a quest to find it.

In Tierra, Captain Criston Vora has built a grand new vessel, and sets out to explore the great unknown and find the fabled land of Terravitae. But Criston cannot forget his previous voyage that ended in shipwreck and disaster . . . and the loss of his beloved wife Adrea, who -- unbeknownst to him -- fights to survive against palace intrigues and constant threats against her life in far-off Uraba. For Adrea is now the wife of the soldan-shah and mother of his adopted son . . .

Map of All Things

This title is due for release on June 21, 2010
We'll send you an email as soon as it is available!