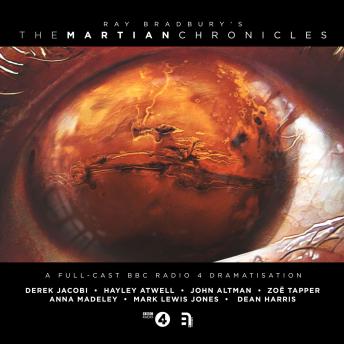 Derek Jacobi and Hayley Atwell lead an all-star cast in The Martian Chronicles, a thrilling new dramatisation, reimagining Ray Bradbury’s timeless fable of doomed Martian colonisation.
When the first expedition to Mars mysteriously disappears, Earth sends a second to find out what happened. But the real mission is classified. And only Captain Wilder knows the truth. Spender, an anthropologist on Wilder’s crew, attempts to prevent the colonisation that she believes will eradicate the last of an ancient people living on Mars. But to what lengths will she go? As the honourable but duty-bound Captain Wilder tracks the now rogue Spender into the Martian mountains, the future of this ancient planet is at stake. Meanwhile, Earth itself teeters on the brink of its own global catastrophe as the very survival of humanity hangs in the balance…

This audio release also includes a special behind-the-scenes mini-documentary with interviews from the stars, plus six special teasers examining the Martian culture!

This title is due for release on February 3, 2016
We'll send you an email as soon as it is available!