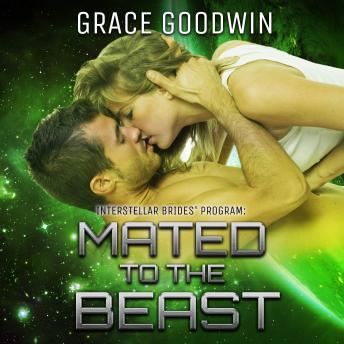 Mated To The Beast

Sarah Mills volunteers to join the Coalition's fight against the Hive in an effort to bring her brother home from the Hive war. When she is mistakenly processed as a bride rather than a soldier, she rejects the match, and the Atlan Warlord desperate to claim her.

Dax, of Atlan, has a primal beast that lurks within him, ready to emerge in the fury of battle or the heat of mating fever. He's battling Mating Fever, hanging onto his control by a thread when he learns that his bride chose to fight rather than share his bed. Against all odds, he tracks her down and takes what the beast demands.

Sarah isn't pleased when a massive brute claiming to be her mate arrives in the midst of battle, and her displeasure turns to fury when Dax's presence leads to the capture of her brother. But after her superiors deem a rescue mission too big a risk, Sarah's best hope of saving the only family she has left is to accept Dax's offer to help, even if that means striking a dangerous bargain...and giving her body and her future to a beast in return.

Mated To The Beast