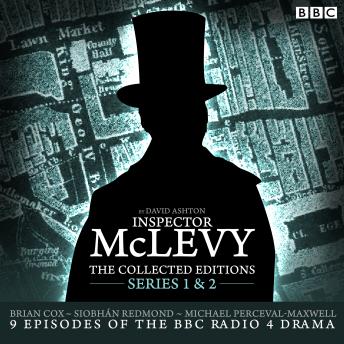 Brian Cox stars as the Edinburgh detective in nine episodes of the BBC Radio 4 series.

Inspired by the real-life memoirs of a Victorian Inspector in Scotland, James McLevy prowls the dark streets of 1860s Edinburgh bringing criminals to justice, with the assistance of Constable Mulholland.

Pilot Episode: The detective’s first adventure.
For Unto Us: McLevy goes on the trail of an ingenious cat-burglar.
The Trophy Club: McLevy tries to solve the murder of a prostitute.
The Second Shadow: The detective is distracted from his work by a woman.
The Burning Question: An unsolved murder brings vigilantes onto the streets.
A Good Walk Spoilt: A game of golf has desperate stakes.
Wild Justice: A ghost from the past returns to haunt McLevy.
The Wild Spark: A tobacco warehouse goes up in smoke.
Stab in the Back: A hired killer roams Leith’s dark alleys.