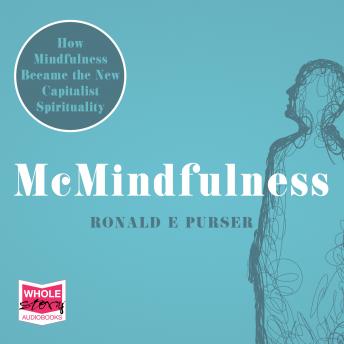 Mindfulness is now all the rage. From celebrity endorsements to monks, neuroscientists and meditation coaches rubbing shoulders with CEOs at the World Economic Forum in Davos, it is clear that mindfulness has gone mainstream. Some have called it a revolution.

The evangelical promotion of mindfulness as a panacea for all that ails us has begun to give way to a backlash, with questions arising whether its claims for achieving happiness, wellbeing and career success have been over-sold. Expanding on his influential essay ''Beyond McMindfulness'', Ronald Purser debunks the so-called ''mindfulness revolution'', arguing its proponents have reduced mindfulness to a self-help technique that fits snugly into a consumerist culture complicit with Western materialistic values.

In a lively and razor-sharp critique of mindfulness as it has been enthusiastically co-opted by corporations, public schools and the U.S. military, Purser explains why such programs inevitably fall short of their revolutionary potential. Simply paying attention to the present moment while resting snugly in our private bubbles is no mindfulness revolution. Mindfulness has become the new capitalist spirituality, a disciplined myopia, that mindlessly ignores the need for social and political change