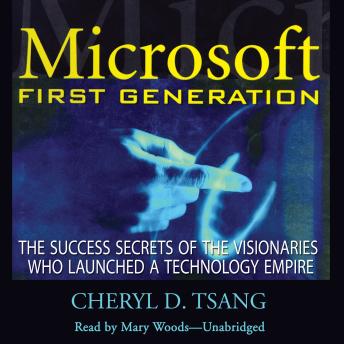 Microsoft First Generation: The Success Secrets of the Visionaries Who Launched a Technology Empire

This is a story with all the ingredients of a modern legend, representing nothing less than the proverbial American Dream-writ extra-large.

It is a story of hard work, brilliance, and extraordinary commitment, featuring the story's original cast members, who could not possibly have foreseen the unprecedented success that awaited them: the forging of a technology empire that would change the world forever. What began as a modest start-up partnership only twenty-five years ago has already surpassed all the giants of contemporary capitalism.

How did Microsoft achieve all of this in so short a time? Cheryl Tsang steps inside the famous culture of loyalty, the storied "maniacal work ethic," and the hardcore world of reckless risk-taking to reveal, once and for all, exactly what makes Microsoft tick.

Microsoft First Generation: The Success Secrets of the Visionaries Who Launched a Technology Empire

This title is due for release on June 1, 2000
We'll send you an email as soon as it is available!