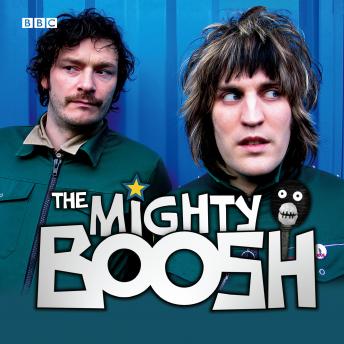 Described by the Observer as ‘Some of the most inventive comedy writing of the decade’, and eliciting an exclamation of ‘Wow!’ from Simpsons’ creator Matt Groening, come with us now on a journey through time and space - to the world of The Mighty Boosh... Here are all six episodes of the BBC Radio 4 series, complete and uncut, from the winners of the Perrier Best Newcomer Award. In Episode 1, a mysterious character called 'The Phantom' is stealing animals from the zoo. Howard and Vince go on a mission to find the thief and the sinister figure behind the plot. In Episode 2, tired of Bob Fossil's management, Howard and Vince venture into the zoo's Jungle Room in search of former zoo boss Tommy Nookah, (Howard's idol) who disappeared there long ago. Episode 3 sees Vince forming a rock band, but after annoying the guitarist Dave and driving him to quit, he calls on Howard to overcome the Spirit of Jazz and join them. In Episode 4, when keeper Joey Moose is savagely bitten, Howard and Vince investigate and discover Bob Fossil is breeding mutant animals to sell to wealthy Japanese businessmen. Episode 5 finds Bob Fossil sending Vince to Spain and Howard to the Arctic to collect more animals for the zoo. Our heroes end up back together facing the perils of the tundra. In Episode 6, Howard and Vince take Tony the prawn to the Zoo for Animal Offenders. Along the way they meet a mysterious hitch-hiker, and end up in the bizarre world of 'The People of the Box'. Starring Julian Barratt and Noel Fielding, with Rich Fulcher, Lee Mack and Richard Ayoade.