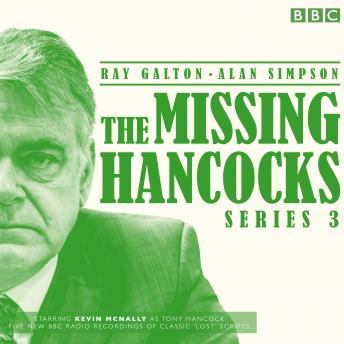 One of the first modern sitcoms, Hancock's Half Hour made Tony Hancock a household name and launched the careers of writing partners Galton and Simpson. However, 20 of the original radio shows were wiped or lost from the BBC Sound Archive, so Radio 4 decided to recreate them. This collection contains all five episodes from the third series.

The first three – A Holiday in France, The Racehorse and The Crown Jewels – star Andy Secombe, playing his father Harry (who himself deputised for an absent Tony Hancock in the original run). In A Visit to Swansea and The Three Sons, Kevin McNally resumes the role of Hancock. Among the supporting cast are Simon Greenall, Kevin Eldon and Robin Sebastian.

Written by Ray Galton and Alan Simpson and with the classic score performed by the BBC Concert Orchestra, these hilarious episodes were recorded in front of a live audience at the BBC Radio Theatre. A piece of comedy history, they have not been heard since their first broadcast, and are a must-listen for fans of ‘the lad 'imself’.