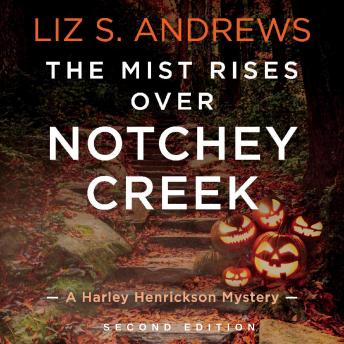 The Mist Rises Over Notchey Creek: A Harley Henrickson Mystery

It's Halloween in Notchey Creek, Tennessee, and whiskey distiller Harley Henrickson is in the midst of preparations for the town's autumn harvest festival. Harley lives a quiet life of books and hard work, an introvert who is dismissed by many as the town nerd. Her life is changed when she and her best friend, Tina Rizchek, discover a disoriented stranger in the ditch, mumbling about a lost boy who was 'innocent.' When the man disappears into the woods, Harley is left with many unanswered questions. Who was the mysterious man, and what happened to the innocent boy?

As she digs deeper, she discovers the stranger, in reality, was no stranger at all, and had ties to many highly-esteemed citizens in town. When one of those citizens, a wealthy history professor, is murdered on Halloween night, Harley decides to investigate. What she discovers is a multitude of secrets, lies, and sins, dating back decades, and revolving around a rock star who has chosen Notchey Creek as his new home.

In the meantime, professional-football-player-turned-sheriff Jed Turner does not appreciate her interference in the murder investigation. City officials are convinced her pet pig, Matilda, is trying to ruin the festival. Her great-aunt Wilma True is on a mission to create matching festival outfits for Harley and her pig. And thanks to her great-uncle Tater, she finds herself hauling a giant model cupcake, a pig, and an antique toilet in her truck.

'Andrews--like her heroine--mixes up a tasty cocktail out of appealing ingredients ...The complex plot is intelligently managed and full of surprises...Characters, too, are multilayered. Keeps readers guessing--with humor and romance balancing the whodunit.' -Kirkus Reviews