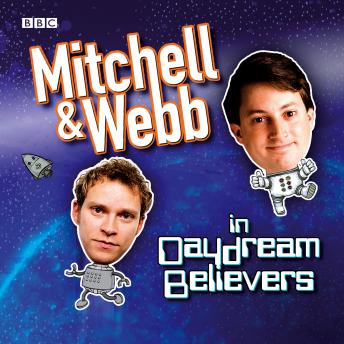 'Daydream Believers', written by and starring David Mitchell and Robert Webb, follows the parallel stories of two flatmates, Ray and Colin, and the mighty alien empire of Baron Amstrad and Info, his retro-looking android. Ray (Mitchell) writes popular science fiction stories when he doesn’t get writer’s block. He does, however, get many interruptions - thanks to his lodger, Colin (Webb). Colin starts ante-natal classes in the hope of finding a girlfriend, and Colin and Ray’s kitchen is suddenly infested with ants. Meanwhile, in the infinite reaches of space, Baron Amstrad is feeling a bit broody, and the galaxy is suddenly invaded by ruthless alien hordes... The Baron gives birth to an idea that might just help. But Will Colin get lucky with a girl? Does the red alert have to be so loud? And do the alien Labradons look more like locusts, bees, ants - or dogs? David Mitchell and Robert Webb are the stars of the Bafta award-winning 'That Mitchell and Webb Look' (BBC2), 'That Mitchell and Webb Sound' (BBC Radio 4) and 'Peep Show' (Channel 4). As heard on BBC Radio 2, 'Daydream Believers' also stars Mark Benton, Olivia Colman, Simon Greenall and Mark Evans.