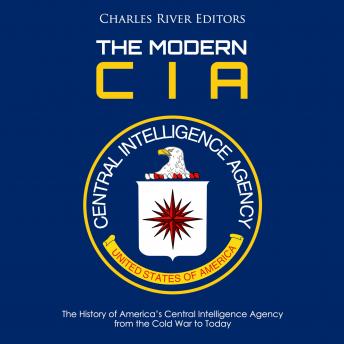 Modern CIA, The: The History of America's Central Intelligence Agency from the Cold War to Today

The 28-year period from 1933-1961, bracketed on one end by Hitler's rise to power in Germany and on the other by the very height of the Cold War, was marked by a remarkably stable succession of American presidents. In fact, only three men held office in this period, and that predictability led to a general stability among government agencies. The CIA had five different directors in its first 15 years, from 1946-1961, but nine different directors in the next 20, with four of those directors serving less than a year. Although plagued by its own share of problems in its early existence during World War II and the early Cold War years, the agency's early problems, smoothed over by a string of tenured presidents, paled in comparison to those it would face in the coming decades.
The presidency became much more tumultuous and plagued by scandal and tragedy in the following decades. Beginning with Kennedy, the country had five presidents in the span of less than 20 years, and none of them completed two full terms, so it is perhaps not surprising that the CIA felt its way through its own tough days during this period. To place the agency's blame for its own very real mistakes at the feet of the ever-churning office of the presidency is not entirely fair, because in many cases the CIA made its own bed and was forced to lie in it, but the continuously changing executive landscape and the subsequent jerky and often haphazard changes of directions certainly played a part in the agency's troubles of this period.

Modern CIA, The: The History of America's Central Intelligence Agency from the Cold War to Today