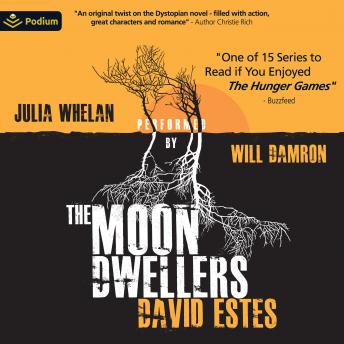 Narrated By: Julia Whelan, Will Damron

In a desperate attempt to escape destruction decades earlier, humankind was forced underground, into the depths of the Earth, creating a new society called the Tri-Realms.

After her parents and sister are abducted by the Enforcers, 17-year-old Adele, a member of the middle-class moon dwellers, is unjustly sentenced to life in prison for her parents' crimes of treason.

Against all odds Adele must escape from the Pen and find her family while being hunted by a deranged killing machine named Rivet, who works for the president. She is helped by two other inmates, Tawni and Cole, each of who has dark secrets that are better left undiscovered. Other than her friends, the only thing she has going for her is a wicked roundhouse kick and two fists that have been well trained for combat by her father.

At the other end of the social spectrum is Tristan, the son of the president and a sun dweller. His mother is gone. He hates his father. Backed by only his servant and best friend, Roc, he leaves his lavish lifestyle in the Sun Realm, seeking to make something good out of his troubled life.

When a war breaks out within the Tri-Realms, Tristan is thrust into the middle of a conflict that seems to follow Adele mysteriously as she seeks to find her family and uncover her parents' true past. In their world someone must die.