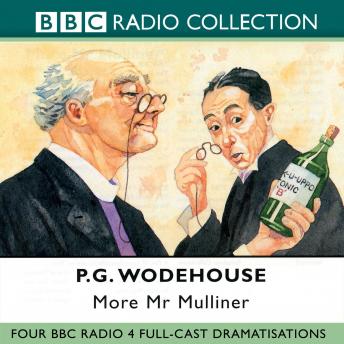 Four more BBC Radio full-cast dramatisations of P. G. Wodehouse short stories, starring Richard Griffiths as Mr Mulliner. Once again we join tale-teller Mr Mulliner in the the Angler's Rest, to hear more implausable aneccotes. In 'The Bishop's Move', the regulars remind Mulliner about a tale he told of his nephew Augustine and a wonder drug, Buck-U-Uppo. This leads Mr Mulliner to tell of a Bishop nearly undone by the miraculous tonic. 'The Ordeal of Osbert Mulliner' concerns another hapless relation, Osbert, who finds an unexpected advantage when two criminals attempt to burgle his flat. In 'The Knightly Quest of Mervyn', young Mervyn Mulliner must prove his love for the glamorous Clarice by finding strawberries in December. The last story relates 'The Truth About George', who seeks help from a specialist to stop stuttering. Advised to talk to strangers, he is mistaken for an escaped lunatic and pursued across the country...