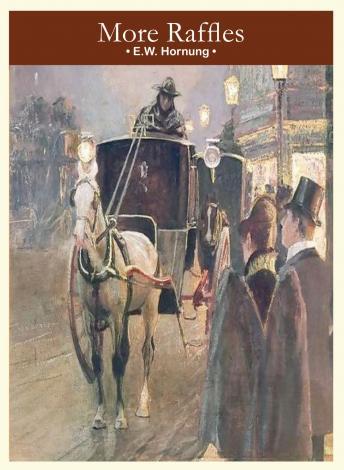 In this, the second collection of Hornungs’ stories to be recorded by Assembled Stories, the darker side of Raffles is laid bare. Inspector Mackenzie begins to suspect that the finest cricketer of his generation may not be wielding a straight bat, a suspicion further confirmed by the appearance of Reginald Crawshay, master criminal, late residence HM Prison, Dartmoor, at Raffles’ rooms at the Albany. Events take a turn for the worse when our antihero is caught red handed on board ship in an escapade of outrageous criminal daring and evades capture by diving from the rail of the deck, spending a long enforced vacation on the Isle of Elba while Bunny resides at Her Majesty’s pleasure for his part as accomplice. The two are eventually reunited but forced underground to continue their illicit business. However, Raffles is a changed man, a bigger risk taker and much more cynical than before. The traumatic circumstances which brought about this metamorphosis are later revealed and with great panache and courage Raffles revenges himself upon those who have afflicted him and lives to steal another day. The stories in this collection are; The Return Match, The Gift of the Emperor, No Sinecure, A Jubilee Present, The Fate of Faustina and The Last Laugh.