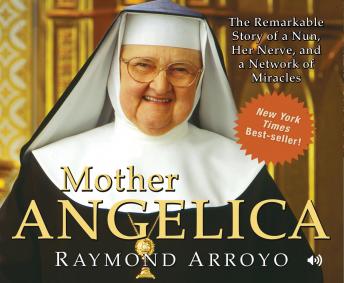 Mother Angelica: The Remarkable Story of a Nun, Her Nerve, and a Network of Miracles

Born Rita Rizzo in Canton, Ohio in 1923, Mother Angelica was abandoned by her father and raised in poverty by a mother who suffered suicidal depressions. As a young woman, after Rita developed severe abdominal pain she sought the prayers of a local mystic and her symptoms disappeared. Awakened to the power of prayer, she vowed to dedicate her life to God and became a cloistered nun. She expected to spend her life hidden from the world, but Rita's faith compelled her to unlikely endeavors, from establishing a monastery in Alabama to starting the world's first Catholic cable network.

Raymond Arroyo's engrossing biography traces Mother Angelica's tortured rise to success and exposes for the first time the fierce opposition she faced, inside and outside of her church. It is an inspiring story of survival and proof that one woman's faith can move more than mountains. 10 compact discs/13 hours (approx.)

Mother Angelica: The Remarkable Story of a Nun, Her Nerve, and a Network of Miracles