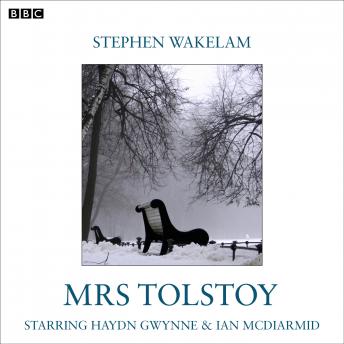 A BBC Radio 4 full-cast drama written by Stephen Wakelam portraying the tempestuous marriage between Leo and Sofya Tolstoy. Originally broadcast in the ‘Woman’s Hour Drama’ slot from 9 August 2010 - 13 August 2010. In his fifties the great writer Leo Tolstoy has a spiritual crisis and converts to Christianity. He stops sleeping with his wife. They have ten children. Taking the vows of poverty and chastity literally Tolstoy wants to give everything away but Sofya has a large family to feed. This is the woman who transcribed 'War and Peace' six times and who fights off rivals on daily basis for a place at his side. For forty-eight years, the Tolstoys tormented each other with love and hate. Ian McDiarmid and Haydn Gwynne star in this portrait of a tempestuous marriage. Also included in the cast of these five episodes are Paul Ritter, Vineeta Rishi, Sam Dale, Michael Shelford and James Warner. Directed by Claire Grove.