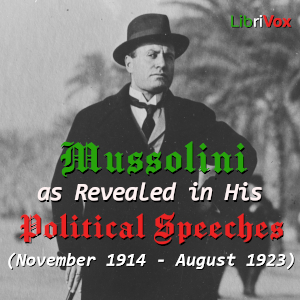 Mussolini as Revealed in His Political Speeches (November 1914 - August 1923)

Benito Mussolini was an Italian journalist and politician, the leader of the National Fascist Party. He grew up as a violent bully, and the characteristics developed in childhood aided his upward career and later rule in Italy. He was also an excellent orator, and this was one of the qualities that helped him rise to power.

This project contains over 60 of his earlier speeches, covering the years 1914-1923: from soon after his expulsion from the Socialist Party for supporting WWI, to his becoming Prime Minister yet still submitting outwardly to democratic rule. (He seized power, threw off the democratic yoke, and became dictator in 1925-1927.) - Summary by TriciaG (Translated by Quaranta Di San Severino)