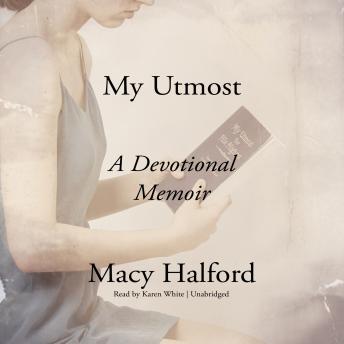 My Utmost: A Devotional Memoir

This is the beautifully written and heartfelt memoir of a young woman from Dallas, Texas, wrestling with the evangelical Christianity of her childhood by examining the one item from it that she is still attached to, the daily devotional My Utmost for His Highest by Oswald Chambers.Raised in an evangelical household by her beloved grandmother and mother, Macy Halford eventually leaves Dallas for a career in journalism in New York City. She has only the devotional to remind her of her religious past-and learns quickly that, though the book sells nearly a million copies a year, no one she knows there has heard of it.Finally, excavating her spiky relations with her upbringing, she quits her coveted job at the New Yorker in order to look more deeply into the background of the devotional-with its daily selection from the sermons and writings of the Scottish evangelical preacher Oswald Chambers-wrestling with who Chambers really was, what ideas informed his teaching and beliefs, and why the book means so much to her.Halford interweaves her own story with that of the Chambers family: Oswald, who died ministering to British soldiers in Egypt in World War I, and his devoted wife, who spent her life publishing his speeches, sermons, and books. The result is that Halford has penned a captivating and candid memoir about what it means to be a Christian, a reader, and a seeker in the twenty-first century. New York Times Pick of Six New Paperbacks to Check Out This Week.

My Utmost: A Devotional Memoir