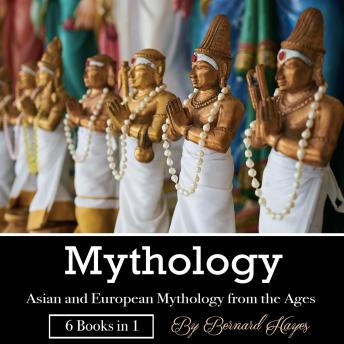 Mythology: Asian and European Mythology from the Ages

Indian Mythology - When we talk about mythology, we often think of the Greeks or the Romans. Many people forget, however, that the historical country India, with more than one billion citizens, has a mythological heritage as well. In this audiobook, we'll dive deeper into that heritage and the beliefs and religions that have contributed to it.
Indian Mythology - Gods and heroes in Indian mythology have made all the difference in their cultural and religious development. If you have ever been to India, you know you can find traces of these things and existing modern elements of Hindu and Krishna beliefs all over the place.
Germanic Mythology - In this informational guide, the author will take you by the hand and educate you about the various gods and goddesses the Germanic peoples of medieval times and before worshipped. The subtle differences and the overlap with Nordic gods are worth studying.
Japanese Mythology - This book is dedicated to exploring the gods and goddesses that the Japanese worshiped, and within the pages you will find subtopics like ancient, exciting stories and mysterious myths and intriguing legends from Japan. You'll learn about gods and goddesses that were common in Japan thousands of years ago.
Korean Mythology - This book is dedicated to exploring the gods and goddesses that the Koreans of old worshiped, and within it, you will find more information about strange creatures from Korean mythology and about the Korean mythology of Tangu and Ahri.

Mythology: Asian and European Mythology from the Ages