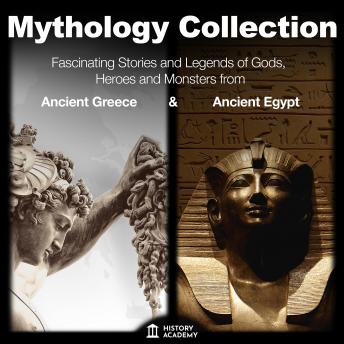 Mythology Collection: Greek Mythology and Egyptian Mythology: All Myths and Traditions: Fascinating Stories and Legends of Gods, Heroes and Monsters - from Ancient Greece and Ancient Egypt

Every myth present in the book is supported by additional material regarding ancient Greeks’ history and culture to help our readers understand the cultural background of the time. The book also includes a genealogical tree to clarify the relationships between the different characters.

“Greek Mythology” is a modern collection of ancient Greek myths gathered by History Academy to let the new generations enjoy these ancient immortal tales. Every myth is full of adventures that will amaze both experienced readers and occasional ones. This book is perfect for anyone who’s passionate about mythology and art and wishes to know more about myths like Pandora’s box or Prometheus’ theft of fire.

History Academy’s brand-new book about Egyptian mythology will tell you all about ancient Egyptian divinities, pharaohs and legendary creatures.

The book includes detailed descriptions about ancient Egypt’s historical and cultural background and maps to help you findwhere the events took place.

Ancient Egypt’s myths still influence our modern collective culture with its stories about powerful gods and pharaohs, curses, mummies and Pyramids. History Academy offers you a complete volume meant to reveal the mysteries of Ancient Egypt.

The book begins with Egyptian myths from the predynastic period and it ends with tales from the period after the pharaonic domain. The Egyptian society was born along the Nile and the natural phenomena connected to the river were thought to be divinities like Anubis, terrifying god of the underworld or Hathor goddess of women and fertility. The gods of ancient Egypt were more than 1500 but they all represented natural forces, social phenomena and abstract concepts.

Mythology Collection: Greek Mythology and Egyptian Mythology: All Myths and Traditions: Fascinating Stories and Legends of Gods, Heroes and Monsters - from Ancient Greece and Ancient Egypt