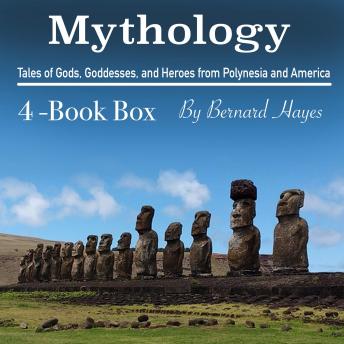 Mythology: Tales of Gods, Goddesses, and Heroes from Polynesia and America

This book has 3 titles:

Polynesian Mythology - This book is dedicated to exploring the gods and goddesses that the Polynesian people worshiped, and within the pages you will find more information about:
Background facts about the Polynesian culture, such as family, social stratification, education, fishing, gardening, religion, art, and traditions.The intriguing legend and background story of Maui, the trickster.Polynesian names from mythology and their meanings.

Native American Mythology - Stretching from the north to the south of the Western Hemisphere, the indigenous Americans have a long-forgotten history, and with that, myths, legends, and stories that have been passed on through generations. Many of them were in tune with nature and had their rituals, beliefs, and mythological creatures. In this guide, you'll hear about:
Native American gods and goddesses that were worshiped by the aboriginals.Some historical background, and the connection to their beliefs.  The most important, best-known legends that have been told and written on cave walls.  Stories that have been told on the American continent about the creation of the world.
Inuit Mythology - This audiobook is dedicated to exploring the gods and goddesses the Inuit people and Eskimos worshiped, and within the program, you will find more information about:
Inuit myths about the creation of the world. The intriguing stories and legends of Nanuk and Sedna. The Inuit religion and how it relates the natural environment in which they lived. Inuit mythological names and their meanings.

Mythology: Tales of Gods, Goddesses, and Heroes from Polynesia and America