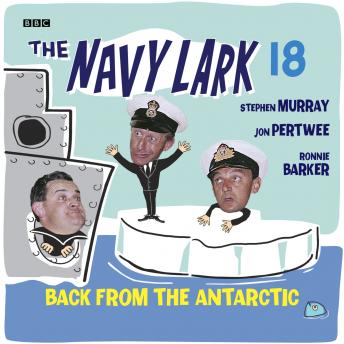 Navy Lark, The Volume 18 - Back From The Antarctic

The Navy Lark, one of radio’s longest running laughter-makers, kept the nation on the crest of a wave from 1959 to 1977. All at sea in the Senior Service were conniving Chief Petty Officer Jon Pertwee, silly-ass Sub-Lieutenant Leslie Phillips, and the constantly bemused Stephen Murray as ‘Number One’. Tenniel Evans made mischief as Leading Seaman Goldstein, and Ronnie Barker played Able Seaman Fatso Johnson and Engineer Queeg, a man permanently out of his depth. Jump on deck and join them once again in these classic capers, as the crew return towing a flotilla; the Fleet abandons Troutbridge; Pertwee borrows the ship’s silver tea service; and Phillips reminisces about his youth. The episodes are: ‘Back from the Antarctic’ (2 July 1967); ‘The Naval Review’ (30 July 1967); ‘Troutbridge’s Silver Jubilee’ (10 September 1967) and ‘Sub Lt. Phillips at Dartmouth’ (29 October 1967).