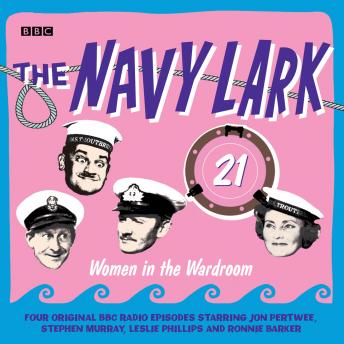 Navy Lark, The Volume 21 - Women In The Wardroom

In 'Women in the Wardroom' (Have Been Redecorating) (3rd September 1967), the wardroom is in a mess and needs to be refurnished. Unfortunately, Murray gives an inebriated Pertwee the fund money to make the necessary purchases. In 'Cecil the Navigation Computer' (Computerising) (17th September 1967) , Cecil, a new combination of computer and teleprinter, is to be tested on Troutbridge. And Cecil also has a memory bank that can answer any question... In 'A Russian Rendezvous' (Seeing Red) (24th September 1967), Troutbridge must take Sir Willoughby, a high-ranking VIP, to a top secret rendezvous. They head for the North Sea where the sealed orders are to be opened. In 'The Flying Machine' (Frustrating the Spark of Invention) (22nd October 1967), the Chief decides that they should enter the Man-Powered Flight Competition, and a one-man helicopter is built in Troutbridge’s hold using numerous items stolen from the crew: the Padre’s mini bicycle, Murray’s golf clubs and Leslie’s pyjamas. Will it take off? Four classic comedy episodes from series nine of ‘The Navy Lark’.