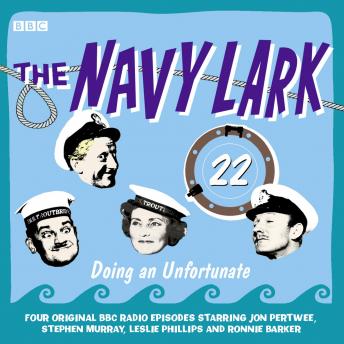 Jon Pertwee, Leslie Phillips, Stephen Murray and Ronnie Barker star in four hilarious BBC radio episodes - including the special Queen's Silver Jubilee edition. 'Stormy Weather''/Bashing Six Kinds of Brick Dust' (22 November 1963): Heather has a dust up with Sub-Lieutenant Phillips about their engagement. Will he ever pop the question? 'Chasing the Kepeac'/'Doing an Unfortunate' (29 November 1963): The Admiral orders Captain Povey to search for a 'ghost ship', but it's so foggy that Phillips can't see what his left-hand-down-a-bit is doing. Luckily, Phillips knows exactly where they are - lost. 'Smugglers in the Solent'/'Taking Some Liberties' (18 July 1965): Customs and Excise ask HMS Troutbridge to help stop a small boat landing contraband on the Isle of Wight. Why is Pertwee acting so nervously? And will Phillips' date be waiting for his return? 'The Jubilee Navy Lark - The Queen's Silver Jubilee Edition'/'The BBC are Sending the Bill to Buckingham Palace' (16 July 1977): There's a rail strike and the entire crew can't get back to the Royal Yacht Britannia. The Admiral suggests a relief crew is provided, but the only ship left in port is HMS Troutbridge... These four episodes also feature Richard Caldicot, Heather Chasen, Tenniel Evans and Michael Bates.