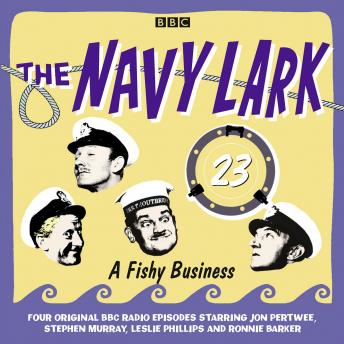 Jon Pertwee, Leslie Phillips, Stephen Murray and Ronnie Barker star in four classic radio episodes. 'Steamship Day'/Charitably Taking Part' (2 October 1966): It's the annual charity event, Steamship Day, and CPO Pertwee offers to supply the fireworks. But they look remarkably similar to Troutbridge's distress flares... 'A Fishy Business'/'Frying Up' (5 November 1967): CPO Pertwee's latest plan is to open up a fish and ship shop on Nunkie's tug. But why does using depth charges get him his supply of fish? 'Troutbridge in Quarantine''/Have Been Painting Pink Spots' (12 November 1967): In the last episode of the ninth series, the Admiral wants Troutbridge repainted so it looks smart for a NATO exercise. But Pertwee's just sold all the paint in order to clear his bar bill... 'Troutbridge Electrifies Portsmouth'/'Lighting Up' (13 October 1968): In the first episode of the tenth series, Troutbridge returns to port after months away. But Mr Phillips has upset the dockyard electricians. Also featuring Richard Caldicot, Heather Chasen, Tenniel Evans and Michael Bates.